The nanowire antenna for light: controlling the direction of light leaving a nanowire

The nanowire antenna for light: controlling the direction of light leaving a nanowire 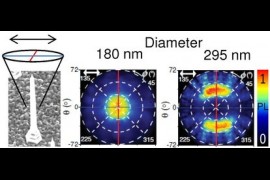 Optoelectronic components are getting smaller and smaller. Lasers and light emitting devices (LEDs) are no exception to this shift and are getting to be at the nanometer scale. Working on this scale introduces various challenges, one of them is that the manipulation of the light emission from these devices becomes increasingly difficult.
Researchers from AMOLF, Technische Universiteit Eindhoven, EPFL (Switzerland) and CSIC (Spain) have demonstrated control over the emission direction from semiconductor nanowires. These nanowires are one of the most promising building blocks of nano-optoelectronics. Being able to control the emission enables researchers to take out bulky optics, such as lenses and mirrors, realizing unparalleled optical integration at the nanoscale. The results have been accepted for publication in two manuscripts by the journal Nano Letters.
Semiconductor nanowires are elongated structures, with typical diameters on the order of 100 nanometer (1000x thinner than a human hair). Due to the elongated geometry these nanostructures can be contacted in electrical circuits, which is required in optoelectronic devices. In these devices electricity is converted to light and vice versa. The diameter of the nanowire is comparable to the wavelength of visible light. These specific dimensions enable the nanowire to enhance its interaction with light, making them promising candidates for LEDs, lasers, single-photon sources and solar cells. Describing and controlling the emission characteristics of single nanowires is a challenging task because of their size. The team of researchers have been able to not only accurately predict in which direction light is emitted from nanowires, but also to control the direction of this emission at the nanoscale. The experiments were carried out at Philips Research within the FOM Industrial Partnership Programme “NanoPhotonics for Solid State Lighting” and the STW programme “Flexible very high efficiency solar cells”.

The researchers carried out two experiments. In the first experiment the direction in which light was emitted from vertically positioned nanowires was modified from a broad to a narrow beam. This was accomplished by changing the diameter of the nanowires. Changing the diameter modifies the way the light is guided along the nanowire, causing different emission patterns. Using this knowledge it will become possible to fabricate nanoscale LEDs with predefined emission patterns by manipulating the nanowires.
The second experiment involved the modification of the direction in which light was emitted by an individual nanowire lying on a glass plate. This modification was attained by small metallic nanoparticles positioned at well-defined locations, which makes it the first hybrid semiconductor nanowire-metallic antenna of light.
Both studies were published online in June 2015 in Nano Letters, and provide additional understanding on the light-nanowire interaction. This paves the way to better nanoscale devices based on semiconductor nanowires.

The nanowire antenna for light: controlling the direction of light leaving a nanowire.