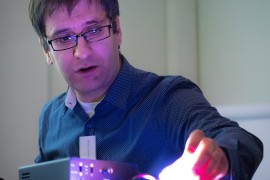 Jaime Gómez Rivas, group leader at DIFFER and professor at the Applied Physics faculty of Eindhoven University of Technology, has won one of the 34 prestigious Vici grants of NWO, the Netherlands Organisation for Scientific Research.

The 1.5 million euro Vici grants is intended for premier scientists in their fields, to set up an innovative five year line of research. Vici is one of the Netherlands’ largest personal scientific grants and is part of NWO’s Vernieuwingsimpuls.

Jaime Gómez Rivas was awarded his Vici grant for an exciting research proposal in his expertise of photonics, the interplay of light and electrical charge in materials. A short summary of his research:

Researchers will create a hybrid state of light and matter to improve the diffusion of excitons (bound states of electrons and electron holes) in materials. Enhancing transport of electrical charges in matter is a major goal to improve optoelectronic devices, e.g., solar cells, LEDs, lasers, photodetectors.